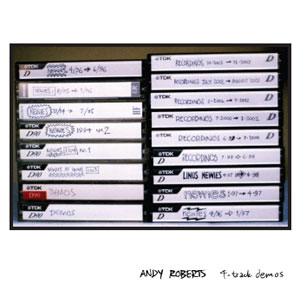 From the liner notes:

Andy Roberts was an undiscovered musical genius, with a guitar sound as distinctive as his voice.

He had an incredible instinct for a good tune. Although he liked to experiment with different styles, interesting sounds, and unusual song structures, there was always hint of pop music somewhere underneath.

He wrote silly songs, stressed songs, inspirational songs, tragic songs, and caring songs, funk songs, pop songs, punk songs, and rock songs. His songwriter-for-hire side project was called ‘Mr Songs’, and that says a lot about his ability to crank ‘em out.

Andy wrote songs about friendship, insecurity, love, loss, and weather. Many of the lyrics are funny, full of dark humour (which sometimes makes uncomfortable listening), and he could never resist a pun. Other songs are so sad, you’ll feel fingernails scraping against your heart, and you’ll want to give him a hug.

Andy was very organised about recording; using his little 4-track, he tidily archived songs onto cassette tapes, in sequential order. The cd was compiled from 18 cassettes, from around 1992 to the end of 2003.

The quality of the first few songs are a bit rough, but stick with it. You can hear him giving it his all, full of beans and joie de vivre.

For more information about Andy Roberts, visit the Linus website at www.linusland.co.uk/Andy.html.