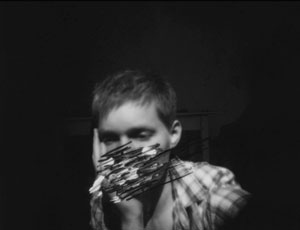 Pony is Audrey. Audrey is a Canadian songwriter from Toronto, now living in Maastricht, in the Netherlands. Pony has been compared to early Cat Power and Broadcast.

(I Forgot) To Turn You On is Pony’s first album.

The album starts off with the feeling that you’re stepping out into thin air, then swooping back up into sunshine and birds singing.

This is an album of simple, unconventional songs and emotional instrumentals. The songs are sparse but warm, and Audrey’s voice is so gentle, so soft.

The music is made up of subtle melodic undertones, buzzy, synthy sounds and warped, dilapidated old tyme piano tinkling.

(I Forgot) To Turn You On is delicate, charming, dreamy, intriguing, wistful and poignant.

Finally got round to clearing my desk today. Covered in dust, the back was. Covered with CDs, the front was, calling out to be loved. Started uploading a whole bunch of them onto my hard drive to facilitate listening, and tuned in.

The first one from the batch is a real gem. I gave it priority because of who sent it to me: Tammy, formerly of forgotten British Riot Grrrl band Linus (one of the original three or four). Her band stood out then because they unsettled, had a distance from the others. Hard to pin down. That’s probably why no one venerates them now. (They ought’a.) Tammy asked for my address a while back, because she has a label. And I trust her taste, because though her label never put out too many releases in the past, I appreciated them. All of them. Not brash. Not in your face. Selective. With dignity. (I Forgot) To Turn You On, Pony’s debut album, is their first release since 2006.

Pony is Audrey, is a Canadian songwriter from Toronto, now based in the Netherlands. Her music is sparse, striking. It’s melodic, in the way bands on Stitch-Stitch Records or Vale Poher are melodic, or Ros’ spin-off bands from Electrelane are melodic. The instruments are given room to breathe. (I know instruments can’t breathe.) If this was 1978, the melodica would be the main instrument. It’s 2011, and so Audrey is having a lot of fun with analogue electronica. (I’m also reminded a little of Lispector.) The mood is melancholy but not sad. Not sad at all. There’s a sense of delight in exploration: circular piano motifs and playful wind instruments.

So yeah, Pony. Out there, you know who you are and whether you’ll like this. I think you will. Give them a listen.

You’re going to have to run those extra 100 metres if you want to hear this special, hidden, magical music.

Pony, a Canadian who now lives in the Netherlands and is sometimes called Audrey has an album called (I forgot) To Turn You On, which is perhaps a bit magical, like a fairy tale. It's very pretty and distant sounding. My favourite track, "That I Must Rise", is a very slow and lazy-sounding series of out-of-tune piano chords which for some reason makes me think of a cartoon character trying to walk through treacle. That's a pretty odd vibe.